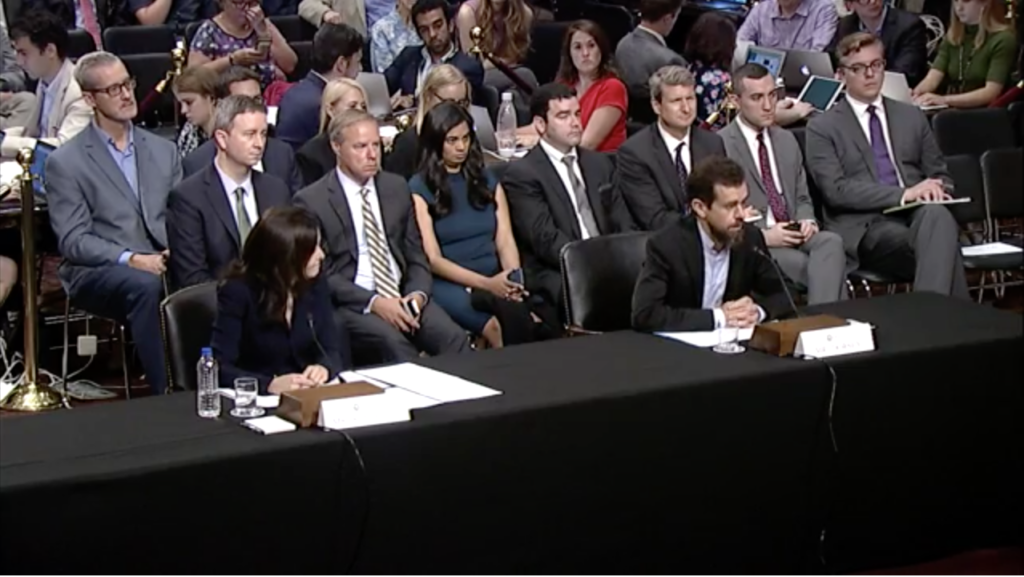 Yesterday, Facebook COO Sheryl Sandberg and Twitter CEO Jack Dorsey sat before the Senate Intelligence Committee to testify on how foreign entities have used social media to influence the democratic process, especially the 2016 U.S. Presidential election, and how the companies are responding to this issue.

Alphabet CEO Larry Page declined an invitation to testify. The company offered to send VP of Global Affairs and Chief Legal Officer Kent Walker, which the Committee rejected. There was an empty chair between Sandberg and Dorsey, where Page might have sat.

Committee Chairman Senator Richard Burr (R-NC) opened the proceedings acknowledging the scope of the problem and thanked the tech giant executives for their willingness to meet to discuss the problem. Burr expressed his dismay and disapproval at Google’s absence from the proceedings, which was a recurring theme throughout the hearings.

“Google has an immense responsibility in this space,” commented Sen. Mark Warren (D-VA), the Committee’s Vice Chairman. “Given its size and influence, I would have thought that leadership at Google would have wanted to demonstrate how seriously it takes these challenges and actually take a leadership role in this discussion.”

Warner as well as his peers were forceful in holding the witnesses accountable for what occurred in 2016 and for how the social media platforms deal with data collection as well as combating misinforming and violent influence campaigns on their sites.

“You, like the Federal Government, were caught flat-footed by the brazen attacks on our election,” Warner said. “Even after the election, you were reluctant to admit that there was a problem.”

“I am skeptical that you’ll be able to truly address the challenges on your own,” he added. “I believe Congress is going to have to act.”

Warner observed that Russian election interference was not an isolated incident — that it continues to happen, and that “other adversaries like Iran have joined the fray.” He also recognizes that the problem is going to get harder to combat, as AI and deep fake technology will be used more and more to fuel misinformation campaigns.

In their opening statements, both Sandberg and Dorsey acknowledged the gravity of the problem and the work that’s been done to combat it. Dorsey likened Twitter to a “digital public square” where ideas can spread “with greater accessibility and velocity.”

“Abuse, harassment, troll armies, propaganda through bots and human coordination, misinformation campaigns and divisive filtered bubbles: That’s not a healthy public square,” Dorsey said. He touted the progress that’s been made since the 2016 election, particularly in shutting down fake and malicious accounts on Twitter, and he signaled his company’s commitment to making further progress.

The issue of data collection was brought up throughout the hearing, with Warner suggesting that a dollar value be put on the data that tech companies collect on users. Sandberg offered a qualified willingness to work with the senator on this issue as long as it didn’t “quash innovation.”

Questioning from Sen. Jim Risch (R-ID) focused on whether the two companies, both incorporated in the U.S. but with a global influence and reach, make a distinction between U.S. and non-U.S. citizens on their platforms. Sandberg shared Facebook’s new policy of requiring those who run political ads on Facebook in the U.S. to provide a physical U.S. address to which Facebook sends a code through physical mail for verification. Dorsey stated that Twitter has a similar policy, but commented that there are limitations for the social site to know where a user is posting from. He did, however, highlight a new system on Twitter, rolled out during the recent Mexican presidential election, that allows journalists and law enforcement agents to report suspicious activity on the site.

Sandberg highlighted Facebook’s use of third parties who determine the veracity of information and links shared on the site. “Finding the line between what is hate speech and what is misinformation is very, very difficult,” she said. “We don’t believe we should be the arbiters of what’s true and what’s false, and we think that’s very important.” Distribution of information that’s tagged as false is now reduced dramatically, and a user is notified if they are about to share something that’s been rated as false. No less important, the platform then provides users with related materials that are factual.

As each Senator took their turn posing questions to Sandberg and Dorsey, most also took the opportunity to skewer Google for not sending its top brass to Capitol Hill. The most pointed criticism for Google’s absence came from Sen. Tom Cotton (R-NE), who speculated that Page was not willing to attend since it would have to answer to the Committee about having cancelled its collaboration with the U.S. military regarding AI, while it still works with “the Chinese Communist Party” on this technology. Cotton also suggested, per reports, that Google is working to develop a search engine that complies with the free speech restrictions within the country.

Sen. Marco Rubio (R-FL) was also highly critical of Google’s absence, and while he commended Sandberg and Dorsey for being present, he pulled no punches — particularly towards Dorsey — for accommodating foreign countries with free speech restrictions. Rubio referenced Pakistan, at whose behest Twitter shut down several sites for violating blasphemy laws. He also cited several journalists and NBA player Enes Kanter, whose Twitter accounts are blocked in Turkey.

“Do you support democratic principles only in the U.S., or do you feel an obligation to support them around the world?” Rubio asked. Sandberg stated that Facebook is only available “where we can operate in keeping with our values.” When Rubio asked Dorsey if there is no moral equivalency between the Senate asking Twitter to defend against disrupting elections and being  asked by a government such as Turkey to block political opponents, Dorsey stumbled over an answer and then hesitated before he said “Correct.”

In another one of the hearings most contentious moments, Sen. Kamala Harris (D-CA) pressed Sandberg on how much money Facebook has made on misinforming political ads. Sandberg downplayed the issue, stating that such content constituted  “0.004% of content in Newsfeed.” She could not give a dollar figure for content such as this. Harris countered that 0.004% of Facebook’s revenue, which exceeds $13 billon on a quarterly basis, could not be considered “immaterial.” Sandberg said she would later follow up to provide a specific figure and also observed that 3-4% of accounts on Facebook are inauthentic at any given time. “In the long run and the short run, it doesn’t benefit us to have any content that’s inauthentic.”

While many big issues, like deep fake technology, were left unresolved, both Sandberg and Dorsey stressed that their companies were investing in the technology and the people to stay ahead of the curve. Among the most poignant observations regarding manipulation and misinformation came from Sen. Angus King (I-ME): “The best defense is for people to know it’s happening,” as many people are still skeptical about the existence of malicious influence campaigns. “I would argue that the heart of free and fair elections is information,” King commented.

Sen. Susan Collins (R-ME) was among the committee members to raise the issue of notifying users when they have been following fake accounts, as well as notifying people — including herself — that they’ve been targeted in misinformation campaigns. The two witnesses acknowledged that both sites need to improve in this area.

Both companies’ stock prices dropped significantly in the wake of testimony, with Facebook (Nasdaq: FB) down 2.8% and Twitter (Nasdaq: TWTR) falling nearly 6%. The composite Nasdaq index is down 1.0%.

In closing, Burr stressed Facebook and Twitter’s responsibility to work with Washington on resolving the problem that likely won’t go away.

“Will using social media to sow discord become an acceptable tool of statecraft? How many copy cats will we see before we take this seriously and find solutions?”

“There is no easy path forward,” Burr continued. “We understand the problem, and it’s a First Amendment issue. We cannot regulate around the First Amendment, but we also cannot ignore the challenge.”

Discussing the challenge in a public forum appears to be a major step forward to managing the issue of spreading misinformation and sowing discord in the run-up to an election. And yet, the collective sentiment of the hearing yesterday seems to be that without a commitment from all the major players— most notably Google, perhaps the most influential of all — only so much progress will be made.